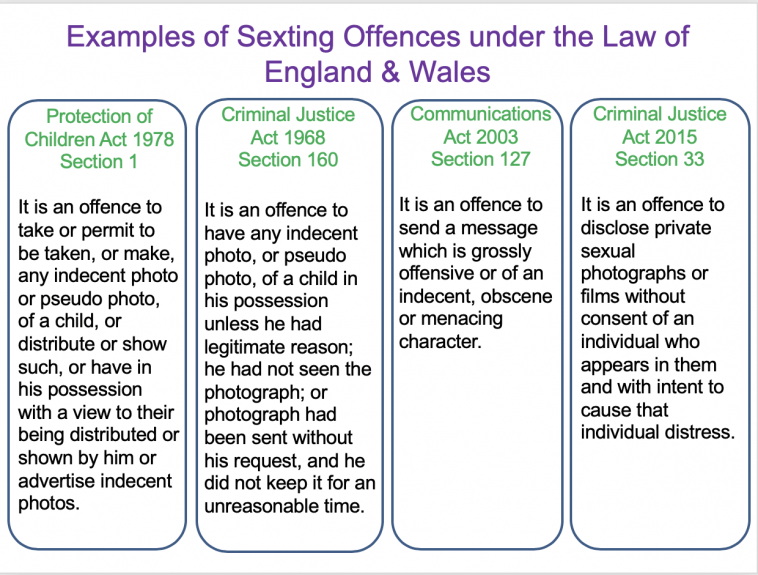 “Sexting” is not a legal term, but one used by academics and journalists. However it can have severe legal repercussions for those engaging in it, especially children, who see it as harmless flirting. The police have at their disposal several criminal law statutes with which to charge an offender. See chart above for a few examples. Research shows that regular use of pornography encourages sexting and cyberbullying, particularly in boys.

Between 2016 and 2019, more than 6,000 children under 14 were investigated by police for sexting offences, including more than 300 of primary school age. This article in the Guardian newspaper highlights some of the issues.

The Communications Act 2003 applies across the UK. However other sexting-related offences would be prosecuted under different legislation in England, Wales and Northern Ireland and Scotland. Producing, possessing and distributing indecent images of children (persons under 18 years) with or without their consent is, in principle, illegal under the law. See above for the most common criminal law statutes used.

Having or collecting sexting photos or videos on phone or computer

If you, or someone you know, has any indecent images or videos of somebody who is under 18 years, he or she would technically be in possession of an indecent image of a child even if they are the same age. This is against section 160 of Criminal Justice Act 1988 and section 1 of the Protection of Children Act 1978. The Crown Prosecution Services will only proceed to trial in cases where they consider that it is in the public interest to do so. They would take into account the ages and the nature of the relationship of the parties involved. If images are posted online without consent and with intent to humiliate or cause distress, that is considered ‘revenge porn’ and will be charged under the Criminal Justice Act 2015 Section 33. See here for the guidance on prosecution in England and Wales.

If your child is under 18 years and he or she sends, uploads or forwards indecent images or videos to friends or boyfriends/girlfriends, this would in principle also breach section 1 of the Protection of Children Act 1978. Even if they are photos of him or herself, such behaviour technically constitutes ‘distributing’ indecent images of children.

Here is an excellent Step by Step Guide to Sexting by the Youth Justice Legal Centre. According to this College of Police Briefing paper, “Youth produced sexual imagery can range from consensual sharing to exploitation. Consensual sexting is less likely to attract police attention. Criminal investigation and prosecution for the image offences listed in this briefing will be appropriate in the presence of aggravating features such as exploitation, coercion, a profit motive or adults as perpetrators as these would constitute Child Sexual Abuse (CSA).”

The real concern is that even just being interviewed by the police will result in a young person being recorded on the Police National Database. This fact can appear in employment checks at a later stage if the person needs to apply for enhanced disclosure. It will also show up for checks for even voluntary work with vulnerable people, children or the elderly.

Kent police have also stated that they are considering charging a parent as the responsible person with the contract for the smartphone that sent the offending photo/video.

This is a general guide to the law and does not constitute legal advice.