Recent research has shown that behaviours and not just substances can be addictive too. They can cause the same characteristic changes to the brain’s reward system that cocaine or alcohol or nicotine addictions produce. (See below). These behaviours include gambling, internet gaming, and social media like Facebook and probably dating apps like Tinder or Grindr.

Here is a paper by world-leading neuroscientists that explain why internet pornography should be considered an addictive disorder too. It is co-authored by multiple researchers in the field of problematic sexual behaviour. It questions whether the new CSBD diagnosis belongs under the “Impulse Control Disorder” category, where it currently resides. The authors suggest that the most convincing, existing support is for CSB as an ‘addictive disorder.’

As the dopamine level soars in anticipation of the ‘reward,’ it quickly falls off again after the reward has been received. Users need to keep clicking to novel material to keep the rewards coming. If we keep forcing the brain to manufacture a constant supply, it stresses the system and shuts down production as a protection measure. If we continue to binge however, the brain decides this must be an emergency for survival purposes and overrides its satiation (‘have had enough’) mechanism. In turn, the high levels of dopamine trigger the release of a protein called Delta Fos B. This builds up in our reward system rewiring the brain to help us focus on, remember and repeat this important reward. 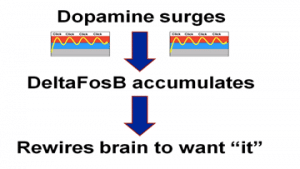 Four characteristics are now associated with the physical changes in brain function as a result of the addiction process. These are:

By contrast, the only thing that gets our attention and raises our spirits is the object of our desire, the addicting behaviour or substance of choice. This is because we have become very ‘sensitised’ to it. Sensitisation triggers powerful cravings or unconscious super-memory of pleasure, ‘euphoric memory’, when activated. The cue-memory link is the brain that ‘wires together, fires together’ process in action. This conditioned Pavlovian memory makes the addiction more compelling than any other activity in the addict’s life.

Rewired nerve connections cause the reward system to buzz in response to addiction-related cues or thoughts. Cocaine addicts might see sugar and think of cocaine. An alcoholic hears the clink of glasses or smells beer as he passes a pub and immediately wants to go in.

Hypofrontality, or reduced brain activity in the prefrontal regions, weakens willpower or self-control, in the face of strong subconscious cravings. This happens as a result of the shrinkage of the grey matter and white matter, in the pre-frontal regions. This is the part of the brain that helps us put the brakes on choices that are not good for our longer term wellbeing. It helps us say ‘no’ to ourselves when we feel temptation. With this area depleted, we have a weakened ability to foresee consequences. It can feel like a tug-of-war. The sensitised pathways screaming ‘Yes!’ while the higher brain is saying ‘No! Not again!’ With the executive-control portions of the brain in a weakened condition, the addiction pathway usually wins.

Adolescents are doubly vulnerable to addiction. Not only do they have more dopamine driving them to take risks (the accelerator pedal is fully depressed), but the frontal lobes have not fully developed, (the brakes aren’t working too well).

Dysfunctional stress circuits. This makes even minor stress lead to cravings and relapse because they activate powerful sensitised pathways.

If you would like more information on research into tolerance and escalation, click here (external site, opens in new window).