The version used outside Scotland can be seen online here.   It requires a subscription, though you can sign up for two free stories per week.  It was also used in this Croatian language news story under the title NAVUČENI NA PORNIĆE Djeca od 11 godina ovisna su o nasilnom seksu written by Ana Muhar.

Fettes College, which counts former prime minister Tony Blair among its alumni, has invited an internet expert to meet students later this year.

There have also been claims that addiction can harm studies, career prospects and relationships, with added warnings that it can escalate to viewing illegal images of child abuse.

And the method has proved so useful that Fettes – which charges fees of £32,200 a year – has decided to adopt it.

Sharpe said she had been invited to deliver the class later this year. “These schools realise the damaging effect hard-core pornography can have on their pupils, in terms of their mental health and their studies,” added Sharpe.

Her foundation has compiled details of thousands of cases of young men from Britain and abroad who have spoken of the debilitating effect of their addiction.

Cameron Wyllie, the principal of George Heriot’s, said: “It’s really important that young people are exposed to the potential dangers of watching pornography through scientific studies that appear to show that excessive use of pornography is psychologically and mentally harmful.

“Evidence is growing that unprecedented exposure to pornography due to the internet, which is easily accessed via smartphones and tablets, is desensitising young men and leaving them unable to get aroused with a sexual partner.”

In June, NHS Lothian called in Sharpe to meet with staff at its Chalmers Street sexual health clinic to raise awareness of porn-induced impotence.

The UK arm of the Huffington Post posted the following story on 22 August 2016.  we have highlighted a nice comment from a reader in the USA.

The Independent did a re-run, largely, of the Sunday Times story, available here.

The story was also picked up widely in the international media, as far away as Vietnam and Indonesia.

A charity founded by an advocate has published a paper on the effects of compulsive internet pornography use.

Mary Sharpe, a non-practising member of the Faculty of Advocates, left practice to establish the Reward Foundation, a charity that aims to further public understanding of the reward circuitry of the brain and how it interacts with the environment as well as to improve health by furthering public understanding of building resilience to stress.

Several sheriffs and leading criminal lawyers have privately expressed their fears over the influence of pornography on the behaviour of young people to Scottish Legal News.

Ms Sharpe said she thinks the rise in sex crime may “in part be driven by the increase in compulsive use of internet pornography”.

“This has to be taken on board by the criminal justice authorities in conjunction with the educational and health authorities if we are to see any reduction in this area of crime.” 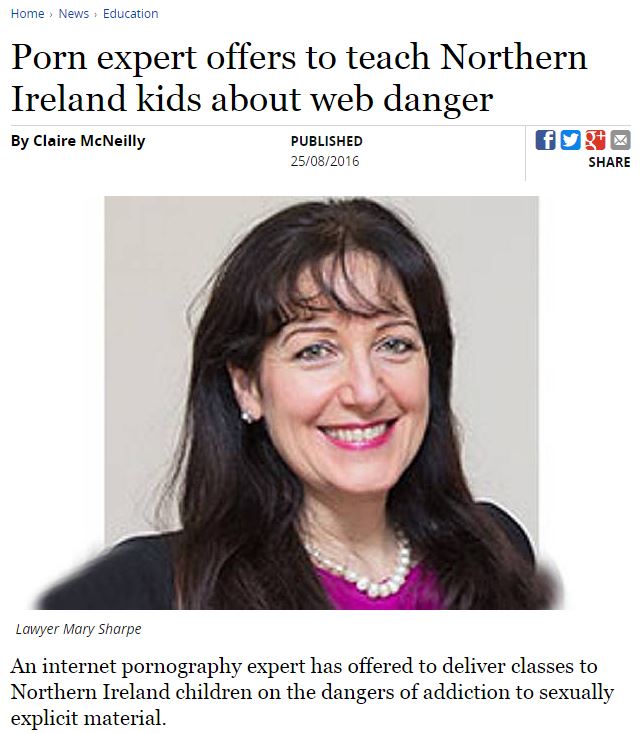 Fettes College in Edinburgh, one of the UK’s most exclusive public schools, has invited Ms Sharpe, founder of the Reward Foundation charity, to address students there at the beginning of next year.

And now plans have emerged to introduce such classes here in an attempt to wean pupils off pornography by warning them about the potential consequences of their addiction.

“Mary and I give joint presentations in schools and we’re very interested in doing training sessions across the province,” said Dr Mead.

“We haven’t yet got any specific institutions in mind, but Northern Ireland is on our to-do list and we’re very open to giving classes in primary, secondary and grammar schools.

“We’re also happy to give separate sessions to boys and girls because they have different requirements when it comes to learning about pornography.”

Ms Sharpe told Radio Ulster’s Nolan Show yesterday that, although they currently deal primarily with 16 and 17-year-olds, they aimed to start educating children in their final year of primary school.

“Research shows that the average age kids start looking for naked pictures and the like is aged 10,” she said.

“Today the internet gives them everything at the click of a mouse or swipe of a finger, so if we want to protect the kids’ brains when they’re at their most malleable, we’ve got to make them aware now.”

“They stop being excited by their partners or by normal sexual arousal because their brains are used to hyper-arousing stimulus on the internet,” she said.

“Instead of learning about how to chat up girls and hold hands and do all the normal gentle steps, they’re being exposed to extreme material.”

DUP MLA Nelson McCausland welcomed the move to make the classes available to local children, saying it was “right that young people should be educated about the dangers of pornography”.

“There is great awareness today about the pernicious nature of such material and the way in which it affects the human brain,” he said. “Anything that helps young people to have a more healthy lifestyle and be aware of such dangers is a good thing.”